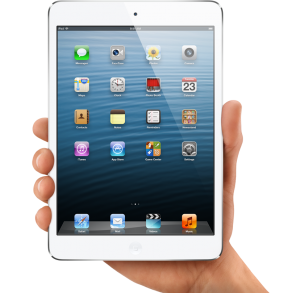 The leaks began a couple of months back and today Apple at long last revealed the cloth back on its smaller version of the iPad – the iPad mini. The device has a 7.9 inch display, 4:3 aspect ratio, lightning dock connector, and front and rear cameras. In addition, it uses an A5 CPU, runs iOS 6, has LTE onboard and possesses a 10 hr battery life.

The device is, without a doubt, aiming to take a cut into the Nexus 7 and the Amazon Kindle Fire market and with a price of $329, Apple is finally breaking into the lower price point demographics.

Apple is also using the same resolution as the iPad 2, while not a “retina” screen, all apps will scale natively to the screen which makes all available apps good to go for this new form factor.

It will be interesting to see if the iPad mini musters up the same amount of hype as the launch of the previous iPads. Seeing as it is simply a smaller version of an existing product, we suspect it may not be as heavily anticipated as previous items.

That being said, it is an Apple product and it seems that anything they release will sell in the millions during the first week and we have little reason to believe that the iPad mini won’t dominate the market like its bigger brother.