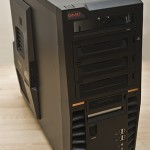 GMC is a Korean company who are dedicated almost entirely on production of cases. We have reviewed a number of GMC cases here at Geek Cube and this review will now add another one onto that list.
Today, we will be looking at GMC’s latest creation, the X-7 X-Station, which is not another HTPC case but actually a gaming case. It looks like GMC are trying to build a case which appeals to gamers on a reasonable budget so this should appeal to a lot of people. Read on to find out if GMC continue their run of good cases.

“GM Corporation Ltd is a manufacturer and distributor headquartered in Seoul, Korea and founded in 1996. The company offers a wide range of PC cases, power supplies, computer peripheral and service to customers worldwide.”

The X-7 is supplied in a typical cardboard box; the artwork is minimal but effective. The case is held by two thick Styrofoam pieces providing the necessary protection during transport. Inside the case you will find only a small cardboard box full of screws and the few of the accessories you will need. There is also a basic manual with information on how to assemble the system. Just to note, the provided screws are coloured green and red even though there isn’t any real reason for that, because the case hasn’t got a windowed side panel to begin with. 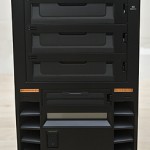 The X-7 is a standard ATX case coming in at 190mm wide, 420mm deep and 425mm tall. It is made of steel but it’s not too heavy, as there aren’t many reinforced points. There are 4 visible 5.25″ bays, one of which has a special slot for an ODD device but no door to actually hide it. The covers of the visible 5.25″ and 3.5″ slots are easily removable by pressing a latch present at the right side.

On the top left side of the faceplate and right above the GMC logo you will find the power button. It’s placed conveniently for those who are going to place their case on the floor. At the lower left part of the faceplate you will find another button with a green power LED right above it. The X-7 has two power buttons and either can be used to power on the system. Right above the front power button GMC have placed a small orange LCD which depicts the system’s temperature, the HDD activity and the speed of one fan. At the lower right side of the faceplate you can easily notice the exposed front I/O ports and the reset button. 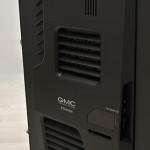 GMC have also placed a HDD activity and power on LED light on the left panel of the case. Below those two LED lights is the fan controller for a single fan (which you can put in yourself). The rest of the plastic assembly seen on the left side panel mostly consist of air vents only and has no other functional purpose. An 80mm generic sleeve bearing fan is mounted on the side panel of the chassis.

The right side panel has a few ventilation holes in an attempt to improve the thermal performance of the case further. There is nothing significant at the rear part of the case, where only the ventilation hole of the 120mm exhaust fan can be seen. 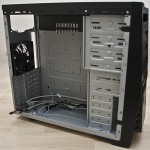 The interior of the GMC X-7 is very simple, which can’t be said about the exterior. A simple 120mm fan is pre-installed at the rear of the case.

The HDD and 5.25″ ODD drive cages are ordinary steel cages which are permanently attached to the chassis itself. GMC should have made the HDD cage removable or at least made it rotatable and added rails to make it nice and easy. This would have allowed easy installation and uninstallation without having to remove any other components.

As you can see from the results, the thermal performance of the GMC X-7 X-Station is pretty decent. It is definitely good enough to house a modern gaming system without any problems. If you are planning to overclock or use multiple graphics cards, you will probably have to upgrade the fans and the case may become more cramped. 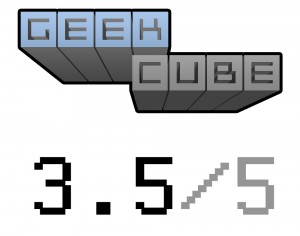