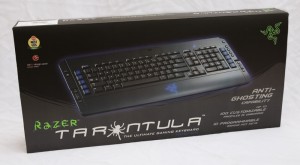 So far, we have seen only mice from Razer reviewed here on Geek Cube. Razer has literally advanced the gaming mouse market with their great gaming mice which are getting better each new release. Razer already has speakers systems and headsets available so it only makes sense to have keyboards, too. Today, we will be looking at Razer’s first attempt at keyboards, the Razer Tarantula.

“Razer is the world’s leading brand in high-end computer gaming peripherals. We reinvented the computer gaming industry by bringing the competitive edge to gamers when professional computer gaming was in its infancy. In the mid 90s, with the advent of networked gaming and competitive first-person-shooter (FPS) games, gamers found that their legacy peripherals were inhibiting rather than enhancing their gameplay.”

Inside the box, you will find the keyboard, a little booklet, a driver CD, the manual, Razer logo sticker, and 10 replaceable keys with a key removing tool.
Other than just the USB cables, there are a line-in and microphone cables which connect directly to your soundcard. Next to these sockets, you’ll see the two USB 1.1 ports. It’s a shame we don’t have USB 2.0 ports on here, but it’s still nice having them anyway. 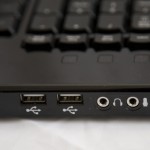 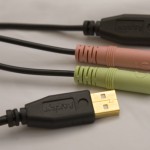 At the back of the keyboard, you will find the Razer have added two USB ports, and audio in/out ports. This makes it understandable why the keyboard has two USB cables.

On the far right of the keyboard, you have some media keys for use with audio applications. You can start your audio application, play, stop, next/previous song, shuffle, volume up/down and mute. There’s no pause button pause which is a little odd as it’s one you would often use. The left side has a ‘home’ button which launches your default internet browser and a standby button. Underneath these 2 buttons, you have 4 buttons which can be used in image software such as Windows Picture and Fax Viewer and Photoshop. There is a rotate button, zoom in and out, and a 100% zoom key.

You also have another 10 keys (5 on each side) programmable for macro functions. These keys would be quite useful in games like World of Warcraft and are not really suited for first person shooters.

The layout is pretty much the same as the QWERTY design except a few alterations. The menu context key has been replaced by one with a Razer logo on. This key starts the keyboard configurations software up. The Windows key on the right hand side has been removed to make room for the arrow keys. The ‘delete’ key above the arrow keys is double the usual length and is the same length as the ‘enter’ key which means the ‘insert’ key is relocated to above the num lock key. Finally, there us a ‘profile’ key above the ‘home’ and ‘end’ keys which allows you to instantly change your keyboard profile that’s stored on the keyboard.

The Razer Tarantula allows a maximum of 10 keys to be pressed simultaneously which, realistically speaking is only likely to ever happen whilst in anger after a gaming session or if you fall asleep and use the keyboard as a pillow.

You can also store up to 5 different keyboard profiles on the 32kb of onboard memory (Razer Synapse™). Having it stored on the keyboard means you can plug the keyboard into any other computer and still use any profile without having to install any software.

We would say that the keys on the Tarantula are midway between normal keyboard keys and a laptop keyboard’s keys which gives it a good balance. Also, the USB sampling rate is set to 1000Hz (or 1000 times per second) which means shortened lag between pressing a key and the result appearing on screen – ideal for gaming because you will only have yourself to blame for delayed reactions.

Installing was not a problem at all, first of all, you connect the keyboard as normal and then connect the extra USB cable into one of the ports on the keyboard. Then put in the software CD and follow on-screen instructions. Finally, you have to restart the PC.

When the Tarantula is plugged in the Razer logo on the wrist pad glows blue and constantly fades in and out. As well as the Razer logo pulsating in and out a cool blue colour, you also have the 10 macro keys, the profile button and the num/caps/scroll lock LED’s glow, but not fading in and out.

When we first started using this keyboard for normal use it took a little while to get used to some parts of the keyboard. This was partly due to having the macro buttons on either side, but we eventually got used to it after a few hours.

The keyboard actually works without the drivers installed but of course with limited functionality (some extra keys wont work). This means that the keyboard can be used in the BIOS so no need to pull out the old dusty PS/2 beige keyboard from back in the day.

Once the drivers are installed, you can set up which keys do what function. We tested the media keys on WinAmp, Windows Media Player 11, and iTunes without any problems. The image keys can also be set for which ever software you use for example Photoshop CS, Illustrator, Paint Shop Pro, etc.

The standard keys can also be changed, and they can even be setup to a maximum of 3 key-stroke macro. For example, you could change the space key to do a double jump in Unreal, or Ctrl to fire three times instead of once.

The 10 macro keys can be setup to run any application or just a plain macro. The keyboard profile can be easily changed by just holding down the ‘profile’ key and the function key to go with it.

The keys can all be removed and replaced to the layout of your choice. The supplied key removing tool helps you take out the keys and you can then put them where you like. 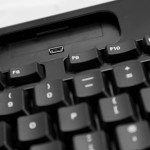 The 10 included keys have transparent tops so that the blue glow is visible when used in the macro button areas. It would have been nicer to have the whole keyboard glowing blue. You can, however, use the BattleDock for connecting the BattleLight which connects to a mini female USB port on the top of the keyboard underneath a removable cover. The BattleLight will light up the rest of your keys from above so you can play in the dark and still be able to see the keys.

We tested the keyboard in a variety of games. First person shooters (Halo CE, UT2004, Call of Duty 3, FEAR Combat, Half Life 2, Battlefield, Counter Strike), RPG’s such as World of Warcraft. Just by looks alone, we could tell this keyboard was of high quality and once we started using it heavily for gaming, it was confirmed. Even the keys are well made and don’t feel cheap. It may not be the best for typing on but compared to other gaming keyboards, this is still far better. What was slightly annoying for us what the lack of grip underneath combined with the lightness of this keyboard meant that it slipped sometimes whilst on the desk. But back onto the positives of this keyboard, the response times and pressing of the keys were great. You can tell that there’s less of a distance you have to push down on each key which means less effort per keystroke.

We didn’t spend much time with the macro functions as we aren’t big fans of them nor do we use the much. People who play World of Warcraft and other MMORPGs will find more use from the keyboard because you can set up say a combination of spells for a fight for example. Unfortunately, as we’re mostly FPS gamers, the macro functions were barely used during our sessions.

We did use a macro in Battlefield 2142 which would fire all missiles at once but that’s all about we could think of for FPSs.
As for the response from keys during our FPS gaming sessions, they were spot on. You can tell that this keyboard is quicker to respond and its definitely because of the smaller key pressing distance and higher sampling rate. In UT2004, we found dodging shots in ‘instagib’ to be easier and movement was more accurate and responsive in all games. You wouldn’t think a keyboard would make this much difference, but surprisingly it did. Well, we certainly thought it did.

Costing around £70, you are paying quite a lot of money for these features Razer has given the Tarantula. If you don’t game much then you shouldn’t have been reading through this far. But if you are a serious gamer and you want extra features to give you an extra edge when you play World of Warcraft or your favourite game, the Tarantula is an offering worth considering.

There aren’t huge differences between this keyboard and your average gaming keyboard but the differences are subtle. This keyboard does however give you ultra fast keys, macro keys, beautiful looks, a USB hub, media and image keys as well has the solid, high quality build Razer have always given. For these features, it sets Razer apart from many other gaming keyboards because they do it so well. We think our rating reflects the quality of this keyboard despite the cons. 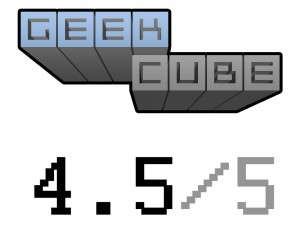 Leave a Reply to Kim Gabrielson