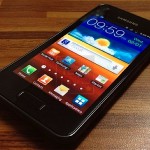 Sure, we’ve read the specs and we’ve seen the press shots, but we didn’t expect to get up close and personal with Samsung’s Galaxy S Advance (GT-I9070) until Mobile World Congress later this month. Fortunately, Filipino tech blog TechPinas was able to get a hands-on with the handset — complete with photos and video. The Gingerbread-packing phone, which looks like a cross between a Galaxy S II (in front) and a Nexus S (complete with curved glass), features a 4-inch WVGA Super AMOLED display, a dual-core 1GHz CPU, 768MB of RAM, 8GB of internal storage, a five megapixel AF camera with flash, an HSDPA 14.4Mbps radio and a 1500mAh battery. It’s expected to launch the week of February 27th, and according to UK retailer Clove, it’s going to cost £295 ($467) plus tax. That’s lovely and all, but without the Galaxy S III on the menu let’s just hope Samsung’s hiding something special up its sleeves for Barcelona. Until then, check out the pictures and video at the source link below.