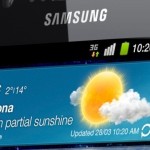 The Samsung Galaxy S III anticipation could soon be over with a May launch touted for the much speculated handset.

That’s the word from Korean publication ETNews, which also reports that the next-gen Sammy flagship phone will be a super-skinny 7mm thin. That’s not quite skinny enough to take the world’s skinniest title away from Huawei and its Ascend P1 handset but will no doubt be slimline enough to ruffle a few feathers over in Cupertino.

The report says the smartphone will utilise printed circuit boards (PCB), connector parts and chips that are 10 to 20 per cent thinner than conventional parts, to keep its waistline thin.

Last week a memo from Samsung dropped into the Pocket-lint inbox stating that “the successor to the Galaxy S II smartphone will be unveiled at a separate Samsung-hosted event in the first half of the year, closer to commercial availability of the product”.

There’s a raft of rumours surrounding the S III online and, if they all ring true, then we’re in for a monster device. We’re not too sure, though, how Samsung is going to fit both a quad-core and a dual-core ship inside.