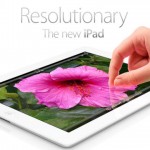 “What’s in a name? Or, more importantly, what’s in a digit? Would that which we call an iPad by any number less than 2 be less sweet? That’s the question Apple posed for us indirectly when it unveiled the new iPad and relegated its future slates (and, presumably, phones) to a numeral-free future. And that new slate? It’s much the same as the old one, with a slightly more chipper processor at its (quad) core and support for both Verizon and AT&T’s fancy new LTE networks.

But there’s one bigger change here, one that will ripple across the industry as each manufacturer struggles to keep up in this ever-accelerating market. That feature is the iPad’s new 2048 x 1536 Retina display. It’s the best display ever featured on a tablet, probably the best display ever on a mobile device, but is that enough to keep this tablet ahead of the pack? Believe it or not, the answer is yes.”