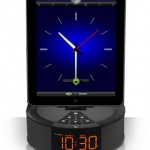 XtremeMac has been crankin’ out iPod docks for years, and now former CEO Gary Bart has launched Stem Innovation, a company dedicated exclusively to iOS accessories. For its first trick, Bart and company have introduced TimeCommand which (as its name implies) goes beyond the whole dock thing and comes across as a control station for the bedroom. Among its many charms are iPhone / iPod / iPad compatibility, the ability to control your mood lighting (including a dimmer and a “wake by light” feature), battery backup (don’t miss work, even if the power goes out), an app with Internet Radio playback, and something called Stem:Sonic iQ digital signal processing. Available now at the Apple store for $100.