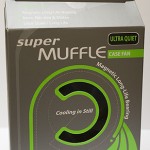 We’re on a roll! We’re back again with another product from VIZO, this time it’s a fan named Super Muffle and it has the new magnetic bearing technology recently released by VIZO. The Super Muffle is an 120mm (also available in 80mm) case fan designed for extended lifetime – up to 50,000 hours and super quiet operation boasting less than 17 dBA. Enough of the talk, let’s just see how good this fan really is.

The Super Muffle’s packaging, like most of VIZO’s products, is attractive. It comes in cardboard packaging which is matte silver and green. There is a small arc shaped window on the front which doesn’t really show you much but it still looks good. On the front at the top, it lists the features:

The rear of the packaging gives more detailed information as seen on VIZO’s website.

Inside the package you get, the Super Muffle fan itself, an adapter for 3-pin to 4-pin Molex and 4 mounting screws. No instructions included, no instructions needed. 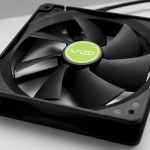 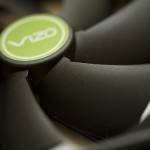 The Super Muffle is black and has a 7 blade design for greater surface area contact. Not much else can be said about the looks as it’s pretty normal.

When we connected the Super Muffle up to a fan speed controller and measured the speed, we got the following:

To test the thermal performance of this fan, we used an Antec P180B with its stock 120mm case fan and then replaced with the Super Muffle. The system specs were as follows:

After our testing with the Super Muffle in our case, there’s nothing negative we can really say. They’re very quiet and only at highest speed you can hear the magnetic clicking noise when you are next to the fan with your ear. 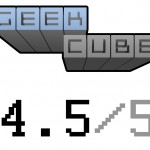